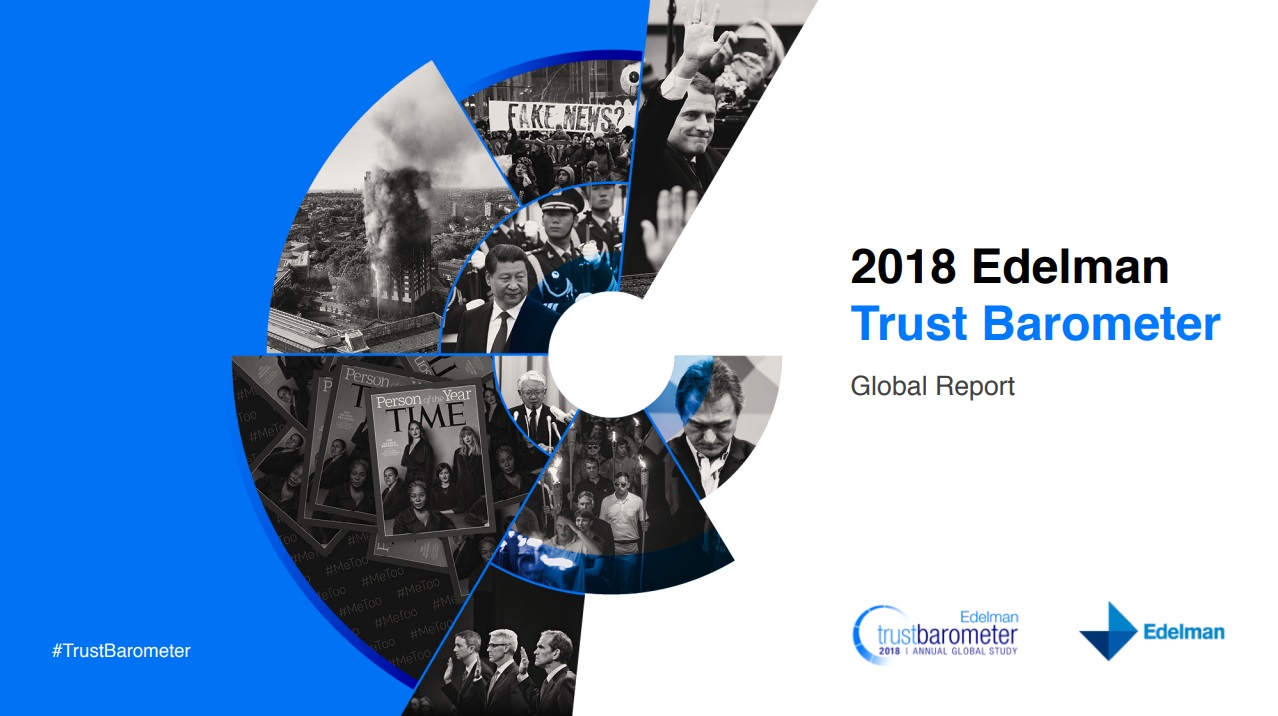 The 2018 Edelman Trust Barometer reveals that trust in the U.S. has suffered the largest-ever-recorded drop in the survey’s history among the general population. Trust among the general population fell nine points to 43, placing it in the lower quarter of the 28-country Trust Index. Trust among the informed public in the U.S. imploded, plunging 23 points to 45, making it now the lowest of the 28 countries surveyed, below Russia and South Africa.

The collapse of trust in the U.S. is driven by a staggering lack of faith in government, which fell 14 points to 33 percent among the general population, and 30 points to 33 percent among the informed public. The remaining institutions of business, media and NGOs also experienced declines of 10 to 20 points. These decreases have all but eliminated last year’s 21-point trust gap between the general population and informed public in the U.S.

“The United States is enduring an unprecedented crisis of trust,” said Richard Edelman, president and CEO of Edelman. “This is the first time that a massive drop in trust has not been linked to a pressing economic issue or catastrophe like the Fukushima nuclear disaster. In fact, it’s the ultimate irony that it’s happening at a time of prosperity, with the stock market and employment rates in the U.S. at record highs. The root cause of this fall is the lack of objective facts and rational discourse.”

Conversely, China finds itself atop the Trust Index for both the general population (74) and the informed public (83). Institutions within China saw significant increases in trust led by government, which jumped eight points to 84 percent among the general population, and three points to 89 percent within the informed public. Joining China at the top of the Trust Index are India, Indonesia UAE and Singapore.

For the first time media is the least trusted institution globally. In 22 of the 28 countries surveyed it is now distrusted. The demise of confidence in the Fourth Estate is driven primarily by a significant drop in trust in platforms, notably search engines and social media. Sixty-three percent of respondents say they do not know how to tell good journalism from rumor or falsehoods or if a piece of news was produced by a respected media organization. The lack of faith in media has also led to an inability to identify the truth (59 percent), trust government leaders (56 percent) and trust business (42 percent).

This year saw a revival of faith in experts and decline in peers. Technical (63 percent) and academic (61 percent) experts distanced themselves as the most credible spokesperson from “a person like yourself,” which dropped six points to an all-time low of 54 percent.

“In a world where facts are under siege, credentialed sources are proving more important than ever,” said Stephen Kehoe, Global chair, Reputation. “There are credibility problems for both platforms and sources. People’s trust in them is collapsing, leaving a vacuum and an opportunity for bona fide experts to fill.”

Business is now expected to be an agent of change. The employer is the new safe house in global governance, with 72 percent of respondents saying that they trust their own company. And 64 percent believe a company can take actions that both increase profits and improve economic and social conditions in the community where it operates.

This past year saw CEO credibility rise sharply by seven points to 44 percent after a number of high-profile business leaders voiced their positions on the issues of the day. Nearly two-thirds of respondents say they want CEOs to take the lead on policy change instead of waiting for government, which now ranks significantly below business in trust in 20 markets. This show of faith comes with new expectations; building trust (69 percent) is now the No. 1 job for CEOs, surpassing producing high-quality products and services (68 percent).

“Silence is a tax on the truth,” said Edelman. “Trust is only going to be regained when the truth moves back to center stage. Institutions must answer the public’s call for providing factually accurate, timely information and joining the public debate. Media cannot do it alone because of political and financial constraints. Every institution must contribute to the education of the populace.”

Other key findings from the 2018 Edelman Trust Barometer include: